Here’s the third part of the Listening Project series (pt.1 – pt. 2); As our fifth birthday approaches in September, I’ve started listening to every release roughly in order, making notes as I go.

I talked with Rob of DreamNotOfToday.com and Arturo Got The Shaft last week, continuing the conversation started here about Warped Tour and punk in general.

For this week’s episode of the Gonzo Podcast, we are joined by the owner of independent record label Mr. Furious Records, C. Howie Howard to continue a conversation started about the controversial lineup for this year’s Warped Tour.

Taking a deep dive on lightning rods brokenCYDE, Millionaires and 3Oh!3, Howie and Rob look for punk in these crossover acts, searching for legitimacy in a sea of polished loops and quantized leads.

I think I might have figured out what I wanted to say, and couldn’t formulate talking with Rob:

Punk is a principle

It isn’t a sound or an era or a culture or even a group of people.  Punk contains its own critique.  Every concrete realization of punk is exhaustible, but the principle – the spirit – of punk is unconditional, and can always

(I’m borrowing language from Paul Tillich here, mostly from his concept of the Protestant principle, which I also used in the podcast.)

The spirit or essence or principle of punk always has the potential to transcend its crystallization in one place and time and be both critical and creative.  Punk isn’t a revolution; it’s the animating spirit of revolutions.  Punk isn’t a culture; it’s a power in people that both criticizes and creates culture.

Yes, punk has a widely known sound and culture in our present and recent history.  But the power of punk – unique in pop music, even hip-hop doesn’t have this element – is that its principle contains the potential for punk’s rebirth.  In this way, the unconditional may break through into our conditional existence.  Among popular forms of music, only punk has this principle as part of its identity.

Coming full circle to the question that started this conversation; brokenCYDE, 3OH!3, and the Millionaires are not punk and don’t belong on Warped because they fail to become a channel for the critical and creative power that is specifically punk. 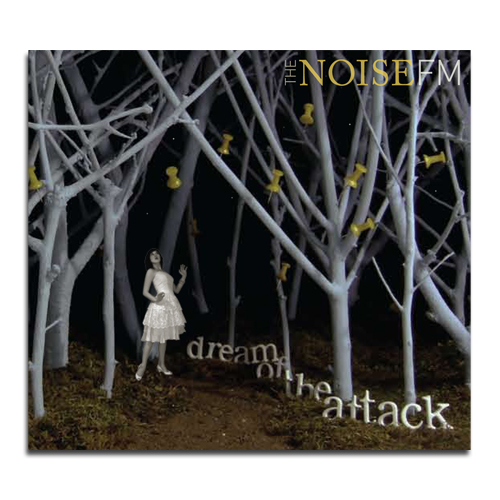 KC/Lawrence indie/electro/alt-rockers The Noise FM are giving away their album, “Dream of the Attack,” for free here.

CA called me last Sunday night because 5*C’s “Aasta” was playing on the 96.5 FM Homegrown Buzz radio show.  I kept listening, and The Noise FM were in the studio, chatting with Jeriney and playing songs from DOTA.  At one point they mentioned that they had posted it for free, and I’d liked what I heard.

If you like Five Star Crush, The Killers, Franz Ferdinand, that kind of dance-influenced rock, you’ll find a lot to enjoy on “Dream of the Attack.”  Solid hooks, a good rhythm section, and production that perfectly straddles the border between local band raw crunchiness and studio polish make The Noise FM a band to download now, and listen for in the future. -h

This is a really cool interview, I think. I especially like the part at the very bottom about lyrical honesty (the subject matter of “Be Right” was practically made for me!)
Pitchfork – Wale Talks Debut Album Details, Dave Sitek Collaboration

there’s a lot of gray surrounding concepts like “honesty” and “fiction,” and i reject the idea that they’re mutually exclusive; that the only honesty is physical fact.

fiction and poetry have a reality that is meaningful, regardless of their attachment to the movement of atoms in time.

now, then – people are justified in feeling misled, if someone like rick ross makes claims or implications about or in their art that turn out to be false.  i’m not trying to excuse that, or draw equivalence.

“…Boots” never literally happened, but it’s got a lot of honest stuff in it i think.  including contradictions; multiple perspectives on an event that can each invoke empathy, even though they exclude each other. fiction may be a more honest way for me to explore this territory, in terms of actually communicating something real with listeners.  -h

I agree: I’m fine with art blending fact and fiction in almost any ratio.  And I think there’s no need to say, “Well, some of this is true, and some of this is false,” etc.  I think you can just make a piece of art and see what truths it’s able to address without wondering or caring if it’s being wholly “honest.”  Art that aimed for the exposition of the literal physical truth would be pretty boring.

As you said, you shouldn’t write a non-fiction book about how you climbed K2 when you actually didn’t, but that’s pretty apparent.

Furthermore, even if we tried to fully distinguish fact from fiction, it would be impossible; our perception of a real event might be more shaky and less real than a dream we had.

so, what’s your take on the rick ross business, or any case where an artist is caught mis-representing the blend of fact and fiction in their work?  it seems to happen a lot in hip-hop, where i think credibility is emphasized more than in other music.

it occurs to me that some jazz musicians have faced a similar standard of credibility.

is there a standard for disclosure?  of course, the second we say yes, it creates the opportunity for an artist to violate it artistically…  so what if an artist wanted to blend fact and fiction in their work and avoid misleading listeners; how should they go about accomplishing that?  -h

I think it would be easy to say that a piece of art should be judged by itself, rather than in any context or with any background knowledge, but I don’t think that’s true or even possible.

During a grad class, I heard about these paintings that were being sold that were supposedly painted by a five-year-old, and people were buying them because for a five-year-old, they were amazing.  As it turned out, the dude who was painting them was actually 45 or something, and everyone who bought the paintings felt boned-over (I think that’s how the story goes).  It seems to me that intuitively, these people had a right to feel screwed, and this guy was able to sell more paintings by lying about who he was and how they paintings were made.

Maybe there’s two different scales to judge art by: one scale might be, “How does this art compare with every other piece of art like it?  Is it better, worse, so-so, etc?”  The other, broader scale might be, “Considering all of the relevant facts regarding this piece art, is it any good?”  One of the relevant facts might be the piece of art’s integrity, or whatever you want to call it.  As I said, I think it’s just about impossible to objectively weight a piece of art in relation to other pieces of art without considering external factors, so I think the second scale is more realistic.

I think the big, murky issue is the expectations that people have.  For example, I expect most writers/musicians/painters to distort and change reality for the sake of art.  Maybe if you were kind of naive and listened to Fountains of Wayne for the first time, you’d think that all of their lyrics were literally biographical: “Wow, he flew a plane for American Airlines and then got fired for reading High Times.  Weird!”  But most everyone sees that it’s storytelling, and FoW would be the first to tell you they’re just making stuff up.

But with rap, it’s more serious, and it’s more about respect and cred, right?  I think a rapper lying to me in order to get my respect seems just as bad as you lying to me to get my respect.  I mean obviously, there are countless differences between you and the dudes from Clipse (or maybe not?), but if you told me a made-up story about how you saved everyone from a sinking ship so that I would think you were cooler, that’s wrong, correct?

Regarding disclosure/presentation: I tink that the best way to blend fact/fiction without being misleading is just to present it appropriately.  I think if it’s done well, people will know.  I know that’s incredibly vague and not at all helpful, but I think that it’s true.

Here’s another distiction with rap that’s important, I think: a rapper might rap about shooting people when he has actually never held a loaded gun or something like that.  But it’s usually never presented as fictional storytelling: usually, it’s presented as hard fact.  Maybe that’s the difference: while rap music is technically art/music, the lyrics are mostly presented as the truth and maybe something kind of separate from art.  With pure art, there are no rules, but with certain types of art (biographies, some rap songs?), there are rules (i.e., don’t make a bunch of shit up).