The day itself was last Thursday, but I haven’t done much more than flip it on and noodle around until today. 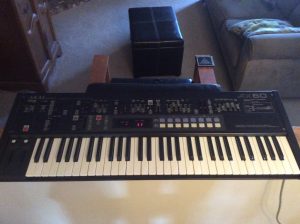 This is an Akai AX-60, a six-voice analog synthesizer built in the mid- to late-80s.  My first purpose in getting it was for pads for Night Mode and other stuff, but of course it will make all kinds of great bass, lead, key, string, and brass sounds.

I’m already in love with the arpeggiator; it has a mode that arpeggiates the notes in the order they’re played so it’s very musical and responsive.  I feel like I could base an entire record around just that.

There’s a song for the new h&s record that I’d planned to layer a Micron sound and a digital B3-type sound for, but I’m starting to wonder if it would be better to write a pseudo-B3 patch on the Akai for it.  Worth a shot, at least.

Some time this weekend I’m going to go through the manual and figure out saving presets, splits, and the rest of the deeper features that may not have a single-function hardware control.