For another Night Mode 90s cover, to be revealed upon release! 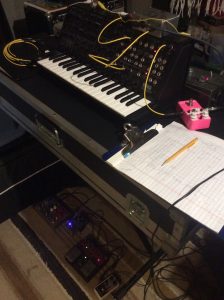 I went monophonic this time, and again with an oscillating HPF drone and a ESP feedback drone.  The ESP drone goes through the Small Stone, through an alligator-clipped voltage divider pot (to cut the level back a touch) and into the EXT SIGNAL IN.

The output goes through the VFE Triumvirate (in bypass; it’s only there as an 1/8″ to 1/4″ adapter) to the EHX PitchFork (used for the intro), Boss RC-20 (grabs a loop in the intro for playback at the end), DOD Gunslinger (distortion; you’ll hear where it enters :-), and my custom build of the 1776 Effects MultiPlex delay.  The MultiPlex’s Space Echo mode is key to the feel of the piece, with a long pre-delay (quarter note) followed by shorter (eighth note) repeats.

In the course of setting up this patch I discovered a variation on the Gattobus paraphonic patch that I will definitely use in the future :-)

It’s been a lot of fun to build entire soundscapes and sonic narratives out of nothing but one instrument, one take, and one note at a time.