Compilation! One song per release*, in reverse chronological order 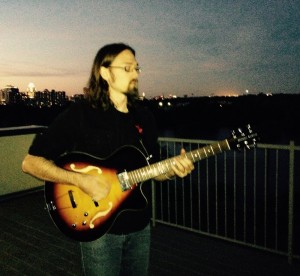 (Not counting comments about gear…)

Peelander-Z – This punk “band” is a series of audience participation bits (barely) strung together with approximately three songs spread across a 40-minute set.  Brilliant.

Pallbearer – With a reputation as more of a studio band, they held up live (except for the backing vocals).  Looking forward to seeing them again in KC in December.

Mineral – These guys are taking a well-deserved reunion victory lap.  It was a big crowd for a 3 PM slot, and we ate it up.

This was the beginning of what seemed to me to be a high number of bands playing through Marshall JCMs and sounding pretty pedestrian and one-dimensional in terms of guitar tone.  Over email Drew pointed out that JCMs are plentiful and affordable, and while that’s true, I also heard plenty of guitarists rocking things like Twins, Stereo Choruses, and 6505s that meet those criteria and sound better.

Run The Jewels – The sense of joy emanating from the stage and reflected back from the crowd was palpable.  Killer Mike is a treasure of humanity.

Sun Kil Moon – Just OK.  Mark has moments of brilliance for sure, but for me, those are separated by extended bouts of tedium.

Death From Above 1979 – They blasted through a ton of songs, and we loved it.  Turn up the bass, though!

Judas Priest – Still.  Bringing.  It.  You forget how many hits they’ve had until they’re lined up, one after another after another.

alt-J – CA enjoyed them thoroughly.  To me they kind of noodle around without ever making much of a point (maybe that’s the point?), so I went back for the end of Judas Priest.

Glassjaw – There’s always time for some solid New Jersey hardcore.  Maybe now I will finally be able to remember consistently which band is Glassjaw and which is Jawbreaker.

The amps started to improve here, and continued throughout the festival.  The mixes were better on Saturday and Sunday, too; Friday was kick-heavy, as is all too common, but the weekend featured really nice mixes.

Fred Armisen – We got tied up in the crowd in the middle of the day and didn’t see much for an hour or two, other than a couple of covers by Fred and his band from what was mostly the comedy stage.  Sounded good, though.

The New Pornographers – Perfect, they could have played the rest of the night and I’d have been thrilled.  Shut up and take my money, my ears, and my heart, voice of Neko Case!

Both Carl and the bassist were playing through Orange cabs!  Amazingly, for all the heavy stuff we heard, NPs were the only band I saw rocking Orange on stage.  Not Pallbearer, not Deafheaven; The New Pornographers.

Nas – Illmatic in its entirety was brilliant, of course, but the rest of his set made the case that the rest of his catalog is underrated and probably due for a critical revision.  See him if you can.

Cass McCombs – No offense to Cass, but after a long two days and almost dying on the way to Austin this was nice to nap through as we waited for Dinosaur Jr. at ACL Live.  Did he put out a second record?

Meat Puppets – I was not as up to speed on my Meat Puppets as you might think headed in; they felt like the Grateful Dead filtered through ’90s sensibilities.  CA enjoyed them, out of nowhere.

Dinosaur Jr. – The sound check on J’s amps was louder than most bands.  Great to see them in a relatively small, impeccably tuned room.

Pissed Jeans – These dudes made fun of their own fans crowd-surfing to their music.  Made fun of themselves, too; awesome.

Deafheaven – Sunbather, which everyone loved, never clicked with me but seeing them perform it did.  CA got into them, too, to my surprise.

Freddie Gibbs & Madlib – Freddie, admittedly, had a lot of substances in his system.  He was still rapping like nobody’s business, and Madlib is a minimalist genius, but we cut this kind of short to squeeze in dinner.

Yo La Tengo – Probably should have rolled with Freddie & Madlib longer.  They can be great, but this set was mostly a 20-minute krautrock freakout, and not in the good way.

Failure – A real highlight for me.  They might have sounded better than on record, even, in a set heavy on Fantastic Planet cuts.

No amps on stage (but a cool Electrical Guitar Company aluminum guitar); they must have been using Axe-Fx or a Kemper profiling amp or something.  Sounded great, though there was some switching trouble.  I’m not sure how many shows they’ve played, so they may still be getting used to the gear.  They didn’t play any new songs, which surprised me.

Neutral Milk Hotel – Jeff & Co. presided over a hi-fi (yes, clearer than the albums) sing-a-long weirdo jamboree, and converted CA to fandom in the process.  I’m so happy to have seen them.

A Tribute to the Stooges featuring J Mascis – We hoofed across Austin in a hurry, only to find a reasonable line rendered impossible due to a guest list that took up 95% of the club’s capacity.  Disappointing, but I listened to three songs through the window, and even that was pretty rad.

J’s solos were nuts.  I don’t imagine he hauled his whole rig into the club, but his tone was right there, unmistakable.

Monday – Though not part of the festival, I will here mention the excellent electric bike tour we experienced courtesy of Rocket Electrics.  Their bikes look and work like regular bikes, but have a battery that will take you up to 20 miles at 20 mph, which is handy for hills and acceleration.  We took the music tour led by Johnny Austin, had a great time visiting some historic Austin music sites, and wrapped up with a rooftop concert.  I opened it with “Coast & Plains” (hence the photo above, courtesy of Johnny); we highly recommend the tour if you’re in town.